Linen – a loved textile but is it sustainable?

Linen is a highly desirable fabric, even considered luxurious, because it’s light, airy and breathable, making it a perfect fabric for hot and humid summer weather, in addition to other uses, such as beddings and tablecloths.  I have loved linen since I was a tween.  Back in the 1993, my dad bought me an orange linen dress, and that was my first exposure to the fabric; I recall my mom telling me that my dress was something luxurious, so I had to take good care of it.  Since then I have associated linen with quality and have owned numerous quality pieces.  But as an eco-conscious consumer, I must ask and answer the question: is linen a sustainable fabric?  Is all linen eco-friendly?

How is Linen made

Being honest I did not know how linen is made until I was doing research on whether it is a sustainable fabric.  Linen is made from the fiber of flax plant stems, so is a natural fabric like cotton. Flax grows all over the world but mostly in Europe.  According to CFDA, linen is considered a rare fabric.  After the plant is harvested, the fiber is detached from a plant in a process called retting.  Retting uses bacteria to decompose/the pectin that holds the fibers together.  There are three types of retting – wet, dew and chemical retting.  Dew retting takes about 6 weeks and involves putting cut flax stems on grass and using dew to detach fibers from the flax stems. Wet retting takes a shorter time than dew retting and involves putting flax in water pools or baths.  Chemical retting uses chemicals to speed up the decomposition process but this process is harmful to the environment and to the flax plant.

While not clear that it adds anything to the discussion of whether linen is eco-friendly, I think a brief over of the history of linen is not only interesting but also provides some context.  So the literature reveals that linen is one of the oldest fabrics known to man. According to Encyclopedia Britannia, linen has been found in prehistoric dwellings in Switzerland and ancient Egyptian tombs, with some fragments found dating back to 5000BC.  The form fitting, pleated dresses that ancient Egyptian queens wore were made of linen because linen can be pleated and starched.  The ancient Egyptians also wrapped their mummies in Linen.  Linen has been around and had varied uses for a long, long time!

Is linen a sustainable fabric?

Is linen eco-friendly?  Yes and here is the how.

Yes,  untreated (not dyed) linen is a sustainable fabric

Untreated natural linen is fully biodegradable.  The natural colors of linen fabric include ivory, ecru, tan, and grey.  When linen is growing organically with no harsh chemicals and pesticides, it’s truly a sustainable fabric. Made by’s Environmental Bench Mark for fibers gives organic linen an A rating vs Organic cotton that has a rating of B.  Conventional linen is ranked as C vs conventional cotton which has the lowest sustainability rating of E.

Linen is a lot more eco-friendly than cotton

Linen requires significantly less water during its entire life cycle than cotton. According to The European Confederation of Flax and Hemp (CELC ) (on their official blog  European flax), buying a linen shirt instead of cotton will save thirteen 1.5 litre bottles of water!  When grown in temperate climates, flax plants don’t require irrigation, rainwater is enough! Most flax cultivation is in Europe, with some in India, Pakistan and Egypt, but in all cases temperate climates rainwater is sufficient for its growth, compared to cotton which requires extensive irrigation.  This makes linen much more sustainable than cotton.

Flax plant can be grown with little to no fertilizers or pesticides!

With little effort, flax plant can meet organic standards as it requires significantly less fertilizers and pesticides than cotton. The flax plant is an annual crop which, according to the Advisory Commission Report to the European Parliament, dated May 29, 2008, has a positive impact on the land, as it allows the land to rest thereby maintaining soil quality and preserving bio diversity and landscapes.

Linen has a lot of promise as an eco-friendly fabric but is only biodegradable if no toxic dyes are added to it. Also, the process of making linen is labor intensive so there is potential for labor exploitation.

How to know your linen garment is sustainable

Look for linen that is 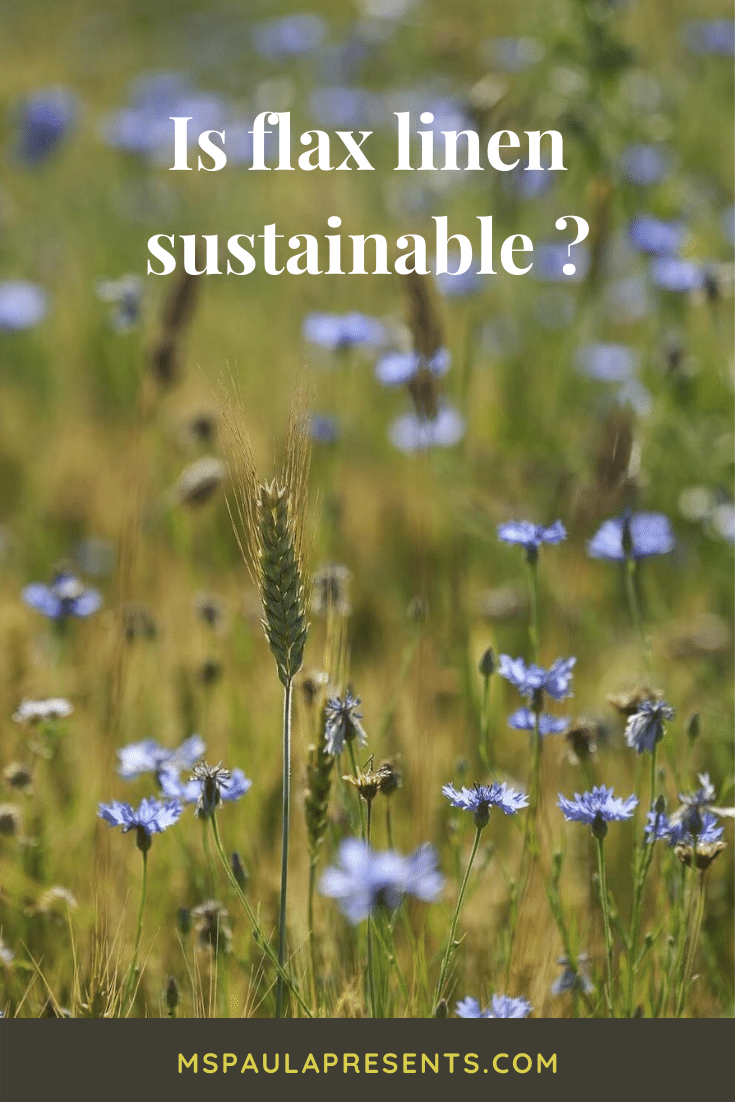 I’m a NYC mom of two, with a deep commitment to fostering sustainable fashion, which also encompasses and vintage and thrift. In every possible way I’ve tried to use every platform at my disposal to add voice to the pursuit of a transformation towards conscious consumption in fashion, in a holistic way, i.e., focuses on every aspect of the supply chain for the fashion industry.